Today was a really, really long day. Although we had made the decision to get as far as possible when we were relatively fresh, it was still exhausting. Made more so since much of our route through northern Germany took us over long stretches of roadworks, which was frustrating for the time it lost us. 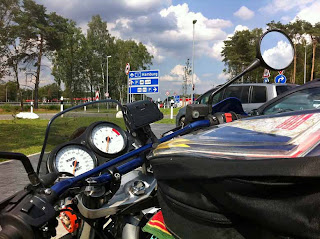 That said, the conditions were pretty good, with more bright sunshine and little in the way of a wind. It was also much hotter than we'd anticipated, but it did give us an excuse to dig out the sunglasses for the first time. We broke the trip down into 90-mile sections, stopping for fuel and a bit of a rest each time, before pushing on.

It should be noted that while there are now speed limits on most German motorways, they obviously forgot to tell the Germans. They drive excessively fast, and far too close to the vehicle in front. It's all a bit tense on something as small as the bikes we were riding, and makes for fraught overtaking. One minute your mirrors are clear of traffic and then, just as you're about to move out, someone in a big Audi or the like goes horsing past at Warp Factor 9. Scary! 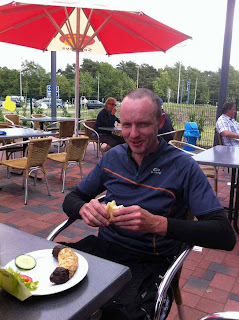 I'm afraid that we didn’t see much of anything but the motorway and a number of service stations today, it was all about putting in the miles. The only thing that did strike me was the huge number of wind turbines along our route through the Netherlands and Germany. They seemed to be everywhere. A definite blot on the landscape. 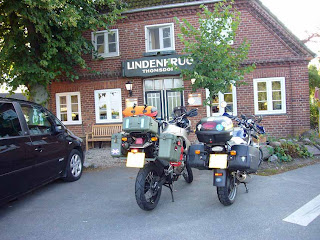 We eventually found our hotel, Hotel Lindenkrug. Located in a small, quiet village it was just what we needed after our hectic day. When the owner found out from Gareth how far we'd come he went away and came back with extra cushions for us to sit on. Very understanding of him.

A couple of beers, a bite to eat, and then an early night. We had more of the same to do tomorrow.