A few years ago the whisky manufacturers Glenfiddich released this advert for their product.

It was shot in Cuba and, at about 30 seconds in, there’s a shot of an old man astride a motorcycle (see photo below). 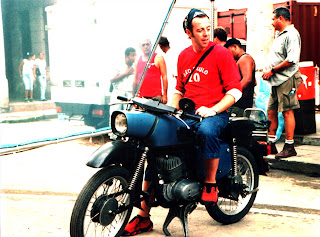 They were nice enough to send him some pictures, including this one of a member of the crew on the same bike, and a copy of the actual advert, but no whisky, unfortunately.

Later, a special edition of Glenfiddich single malt whisky, 'Havana Reserve', was barred from the US market because it has been made from whisky aged in Cuban rum barrels and therefore contravened the longstanding US embargo on importing products from its Communist neighbour.
Posted by mr.combo at 20:02