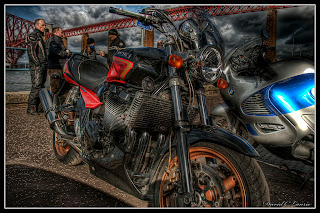 This is a heavily doctored photograph that I came across of a Suzuki GSX1400 and a BMW K1200RS at a meeting in the shadow of the Forth Bridge on the Fife side of the water.
The person who made this also did another one in the same style that I really liked of the P.S. Waverley, the last ocean-going paddle steamer in the world. 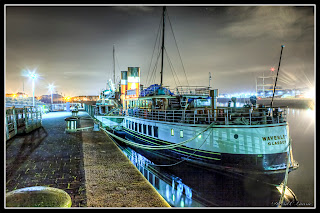 I have many fond memories of trips 'Doon the Watter' on the Waverley. First as a child, and later as an adult after I had discovered beer and jazz music, both to be had on their Jazz Cuises along the Clyde coastline.

(both photos from Urban Glasgow website)
Posted by mr.combo at 14:10