I was in York last weekend where I managed a side-trip to the National Railway Museum which I would heartily recommend if you're in the neighbourhood. 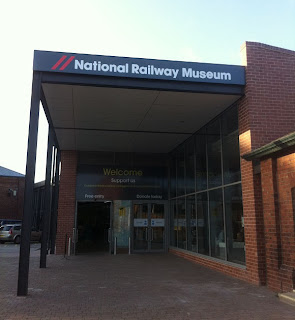 I admit that it was my second choice as I had planned on taking in the Craven Collection of vintage motorcycles. However, as is my want, I didn't read the details on their website properly. It only opens to the public one day a month.
Anyway, back to the trains. As mentioned in an earlier post I'm not exactly a big railway fan, but it made a welcome diversion when you've traipsed around half a dozen other museums extolling the virtues of the Romans, the Vikings, and the Elizabethans etc.


Unlike the other museums in York, this was also technically free (all the others require you to put your hand in your pocket and hand over the best part of a tenner per person for the privilege of looking at things). I say, technically, as you are encouraged to make a donation of about three pounds, which I was quite happy to hand over.


So what is it like? Well, it's big, obviously, as it's full of large locomotives. Also on view is a quite staggering amount of memorabilia, ephemera, station signs, model trains, assorted interactive things, film shows etc. And, if all these static displays are too boring, you can step out onto a viewing platform and watch the real trains plying their trade at York railway station. The tracks are about 30 feet away from you.
What is it about steam trains? Why do we seem to have such an attraction to them? One view I heard expressed is that it's because most of the moving bits are on the outside and you can actually see things working. Oh, and maybe something to do with smoke and fire. We're all big kids at heart.
I could only really dredge up the names of two of the more famous steam trains, Mallard and The Flying Scotsman.
Sure enough, there was The Mallard. However, although there is a whole room devoted to The Flying Scotsman, the actual locomotive itself was nowhere to be seen. Perhaps they were working on it elsewhere during the off-season. It was a bit disappointing that there wasn't even a sign explaining its absence.

Email ThisBlogThis!Share to TwitterShare to FacebookShare to Pinterest
Labels: Museums