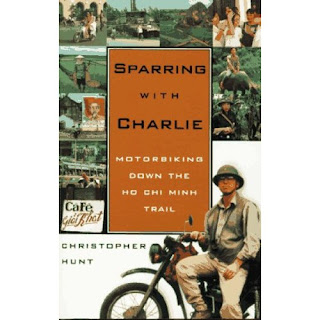 Hunt, a law school dropout turned pulp fiction writer, heads to the demilitarized zone in search of material for a new novel. His plan is to seek out the Ho Chi Minh trail, an infiltration route used by the North Vietnamese Army, and try to figure out what really happened during the war and to see how time has changed American-Vietnamese relations. Instead, he ended up writing an account of his arduous journey.

He wasn’t in the war so doesn’t know the country. In fact, before his trip he’d never ventured outside the US. He doesn’t speak any other language but English and he’s not an accredited member of the media. Not one to be deterred by these problems he buys the cheapest motorcycle he can find, an old Russian Minsk 125 with some serious mechanical problems, and heads out into the countryside with a half-baked plan to travel as much of the trail as he can without so much as a map, since no maps of the trail exist. 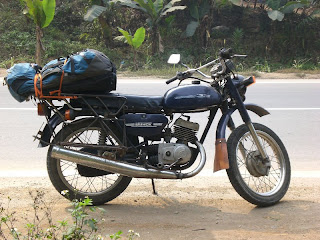 Hunt relies on the advice and directions of village people, former U.S. military officers and former Viet Cong officers alike to reconstruct the trail, enduring not only physical hardships but constant bureaucratic obstruction. He takes several wrong turns and ends up on many dead end roads due to bad advice and the inability of the Vietnamese people to pass up a chance to talk to an American tourist in need of directions. It contains everything that you might expect to turn up in a book about a foreigner travelling in a communist country - poverty, ideology over common sense, corruption and the terrible inflexibility of the system.

As a traveller he seems dangerously unprepared. However, despite his woeful inadequacies he manages to stumble through a series of setbacks in a certain amount of charm and naiveté, and the whole piece put me in mind of the sort of adventurers that the British Empire churned out in the 1920s and 1930s. Muddling through, convinced in the superiority of their particular way of life and, as for the natives, they’d ‘just jolly well make them understand English’.

It’s written in a series of diary-like entries and, although nowhere as good as Ted Simon’s “Jupiter’s Travels”, it’s not that bad. It provides a glimpse of a country that many of us may have forgotten about, and this is a unique account of an area soon to disappear forever under a six lane highway. If you have any interest in the Vietnam conflict, Russian bikes, or mad men taking foolhardy motorcycle trips in exotic countries, this book may be for you.
Posted by mr.combo at 17:07