There are worse ways to spend your last day in Norway than, sunglasses on, bend-swinging along the fjords in bright sunshine. So, that's what we did, and very fine it was too.

A special mention, though, must be made of our caravan/camper-wagon loving fellow travellers. It takes a special kind of selfish bastard to trawl one of these around at 35 km/h (20 mph), holding everyone else up and never once thinking about pulling over to let them by, but it takes a special kind of evil selfish bastard to hitch a caravan to a camper-wagon and then proceed to crawl around the same roads at an even slower pace. There can’t have been much left at home. Maybe they were scared that they’d be robbed when they were away so just took everything with them? 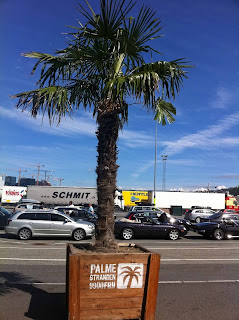 Anyway, having started our day early, we arrived in Oslo in plenty of time, parked up and had a wander around, although one ferry terminal is pretty much like another. This one, just to be different, had palm trees in the car park, though.

While we were away from the bikes we each picked up a parking ticket (500 NKr), which I don't think we’ll worry too much about. 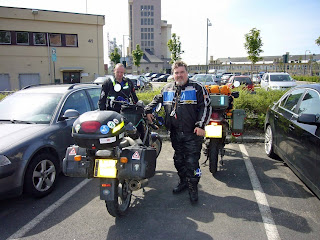 However, once on board the pantomime started. As I mentioned before, we weren't impressed with this crossing. We had a similar problem getting the bikes secured and then when we got to our cabin we found that the twin room we'd booked contained a double bed. Back to reception to get it changed, to be told politely that the boat was full and that there was absolutely no way we could change cabins. Not good enough, we said.

It appeared that we'd been 'upgraded', and they seemed to feel that we should somehow be grateful that we hadn't been charged for this. It didn't matter that we didn't ask for, or even want the upgrade. We were getting nowhere and then the head honcho appeared. This turned out to be what looked like a very large man in drag. About six feet tall, she had shoulders and hands on her like a navvy. Once more it was explained to us that the boat was full and that there was nothing which could be done, and asked if we would, as a special favour to her, just sleep together for the one night.

In other circumstances it would have been funny, but the joke was definitely wearing thin as we stood there sweltering in all of our bike gear. We were adamant that we wanted the cabin which we'd booked and paid for, she was equally adamant that we weren't going to get it. I suggested that maybe someone else might actually appreciate an upgrade to a double room and why didn't they ask some folk if they'd like to swap cabins. It seemed that this possibility hadn’t occurred to them. Eventually a young couple agreed to the swap and we finally managed to decamp to our proper accommodation.

Drama over, we went topside and sat in a window seat and watched Norway slip by as the sun set. A peaceful enough end to our Norway adventure.