From reading through my earlier posts on refurbishing the Skorpion it sounds almost too easy. Although I didn’t have too many problems, it was mostly a cosmetic job after all, those I have had to date were doozies. 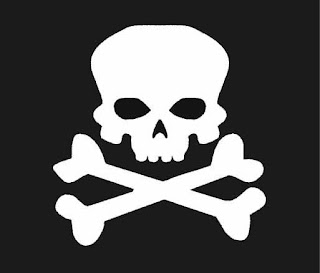 Having nailed everything back together, I found that that the instrument lights mostly didn’t work. Removing the clocks for a good look at the wiring showed nothing obviously wrong. On the basis that sometimes it’s the little things, changed all of the bulbs, but still no joy.  Hmm.

While over to pick up an old frame Iain (Kawa) kindly offered to take a look at the wiring for me. I gladly accepted, as I hate wiring problems. When we opened up the loom we were met with the sight of loads of corrosion and a lot of badly frayed wires. Not too difficult to work out where the probable cause of the problem lay.

Iain spliced in a few lengths of new wire and the loom got tidied up and cleaned before being put back together. All but the neutral light was now working and, as that is a common Skorpion problem with a recognised solution, it can wait for another day. I can manage without a neutral light.

So, I thought that everything was now working and got ready for my trip to Ireland. Loaded the bike and set off only for it to conk out at the end of the road. Re-started it lasted only another half mile before coming to another unscheduled halt. It felt like fuel starvation, but I didn’t have time to sort it out as I had a ferry to catch so rode slowly home and picked up the Triumph instead.

Once home after the rally, it became apparent that the fuel tap was partially blocked. This had come with the new tank and I had had no reason to doubt it would work. It was a ten minute job to swap it over. Fingers crossed, I took the bike out for a lengthy spin to see how everything had bedded in. Everything was working fine. At last I thought that I could relax.

However, when I got home I was appalled to see that the paint on the swing-arm was bubbling and peeling off in large chunks. The whole thing was covered in brake fluid (see the streaks on the mudguard) which had eaten through the paint. The finish hadn't been perfect to start with, but this was beyond a joke. Now you know why they say to avoid spilling the stuff on your paintwork! 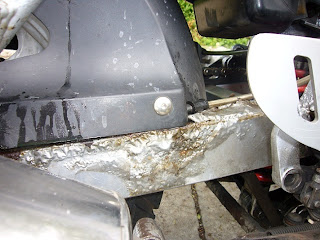 It turned out that the brake line had split, so I washed everything off and ordered up a new one and some new banjo bolts as well. These were fitted today and now the brakes are working properly and the fluid is staying on the inside again.

Actually, all that sounded relatively easy as well – either get someone else to do the work for you or replace the bit that isn’t working properly.

I also found myself with a number of items which were purchased but never used. Sometimes my enthusiasm for the project got the better of me, other times something came along so cheaply that I grabbed it and then tried to see how it could be made to fit into the scheme of things. I guess that I’ll either hang onto this stuff for future projects or put it back onto eBay and see if I can recoup some of my money.