The original idea was to start a blog to cover this year's planned motorcycle adventures in Norway, beginning with getting the machine I planned on using, a 1994 MZ Skorpion Traveller (see photo), prepared for the trip, and adding in other stuff as I went along. 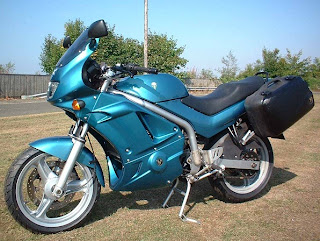 Sheer laziness on my part has meant that, while I've done the actual work, and documented most of the various stages, that was about as far as I got until now. So rather than a work in progress, what I'm about to post here is the work done to date.
How interesting this will be for those of you who don't own or have any interest in MZ Skorpions is anybody's guess. On the other hand, it might give you some ideas about making alterations to your own bikes.
The actual trip will be covered later (crosses fingers and hopes for the best).
Posted by mr.combo at 18:55