Before fitting all of the bodywork back onto the machine I gave it a good polish and added a few accessories.

The original MZ tank badges had gone a bit 'milky', so I bought some replacements from Grahams Motorcycles in Taunton, your source for MZ Skorpion spares in the UK http://www.grahamsmotorcycles.com/ 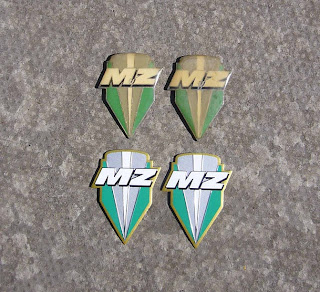 They are not exactly the same as the original ones, ‘MZ’ rather than ‘MuZ’ for a start, but a lot better than the plastic 'bubble' badges being offered for sale elsewhere. These new ones are about half as thick and slightly curved with adhesive tape on the back, so fitting them is simplicity itself. Just peel and stick. 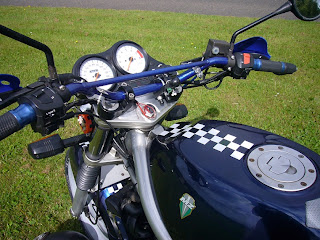 I added a chequered design to the front mudguard and petrol tank. This is pre-cut vinyl and is sold through eBay for people tarting up their Vespa scooters. I think that it looks equally good where it is now.

Then a couple of small decals for the tail piece of the Skorpion. 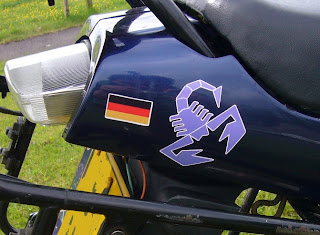 Fiat Abarth products use a scorpion logo, so I bought a pair of Abarth stickers and, in homage to my Triumph which sits there with its Union Flag decals on the fairing, some German flag ones as well. Why are British (and American) firms the only ones to feel the need to market their products with national flags anyway? 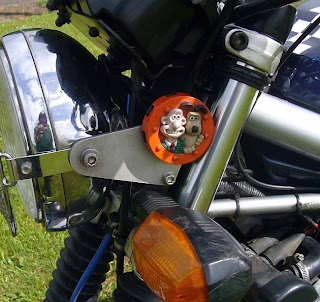 And, finally, a Wallace & Gromit badge to watch over the bike (actually, it's a plastic air freshener that I took apart and drilled, glued and reassembled so that it could be bolted on).

There you have it, some finishing touches. Now it was time to nail everything back together and see what it looked like.