The standard Skorpion sidestand isn't overly strong and I've had two of them fail on me on two different machines. What generally happens is that top mount bends when a heavily laden machine's weight is put on it. This can be compounded by the sometimes overly-enthusiastic strapping down that happens on ferry crossings. The result is the machine rides lower and lower until the top mount bends or snaps completely. 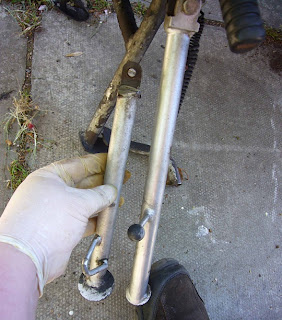 I bought a second-hand stand destined for another MZ from the SM/SX 125 range. This is much stronger, being heavier steel, and it's a bit longer as well. I had to grind the head into the shape of the original and then fit it with a heavier bolt, although I did manage to retain the original springs. Once painted it went on with a bit of work and I now have much more confidence in its abilities. 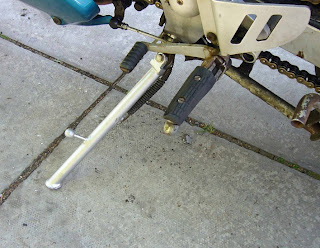 An added bonus is that the angle at which the machine comes to rest  is slightly more upright due to the longer arm on the stand. You no longer get the distinct feeling that your bike is going to keep sinking lower and lower until it comes to rest on the ground.

Edit: on the trip the new sidestand bent at the same place as the old one with similar results. Not really worth all of the effort, really.