I've never really had any great problem with the performance of the standard Grimeca brakes on the Skorpion, although the pistons on the rear caliper are prone to sticking and I find that they usually need stripped down and cleaned up at least once a year. However, as I was changing everything else, I decided to upgrade to a set of Brembo calipers. These are better quality than the Grimeca ones, which are reportedly copies of the Brembo anyway, and as a bonus they use the same fittings, hoses etc. as the Grimecas. 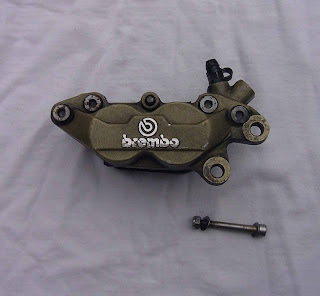 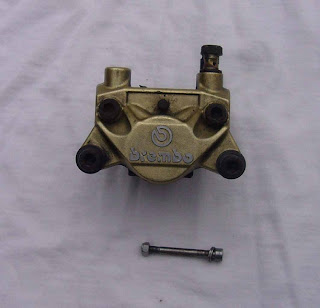 I picked up a pair of second-hand calipers from eBay quite cheaply. The front one was originally fitted to a Cagiva Mito, the rear from a Ducati Monster if you're interested.

The only real difference between the two different calipers is that the rear Brembo isn't threaded to take the mounting bolts. A friend offered to put in some helicoil inserts as he'd done the same modification on his Skorpion and had bought a kit to do it with. It's surprisingly easy, and took all of five minutes to cut the threads and fit the inserts. It will now bolt straight onto the existing mounts with the bolts you took off - or better yet, some shiny new stainless ones. 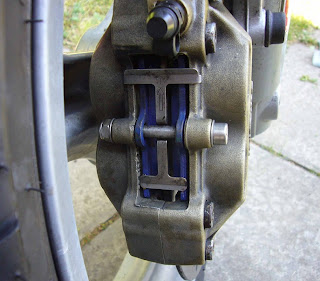 The standard brake pin and circlip arrangement was replaced with stainless bolts and locknuts for peace of mind. Circlips have been known to fall off on occasion, and I'd prefer not to find out the hard way that my brake pads have followed suit. While I was at it, I also replaced the bleed nipples with new stainless ones. 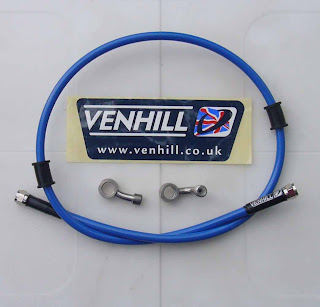 As already mentioned, the front hose was now too short and had to be replaced. Once more turning to eBay (what did we all do before the computer age?), I bought a new, longer length of stainless brake line together with some new stainless banjo bolts from Venhill. I chose a hose in a dark blue sheath to match everything else and the banjo bolts had 20º (top) and 90º (bottom) bends in them. 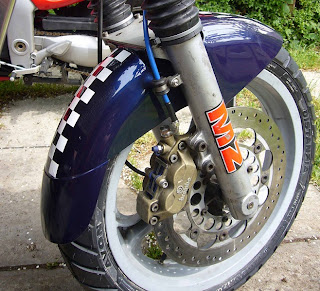 As both calipers came with new pads, all that remained was to re-fit everything, top the master cylinders up with brake fluid and test everything to make sure that both brakes now worked.


Edit: I’m reliably informed that the Front caliper is a Brembo P3034, with 40 mm bolt distance (not 65mm). For the rear brake you need a Brembo P32F.