When I came across a nice stainless steel radiator guard destined for a Suzuki Bandit really cheaply I couldn't say no. Especially as it already had a scorpion etched into it (brand name). 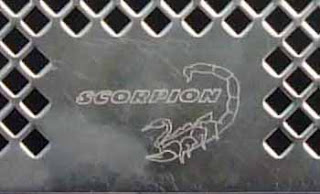 Okay, it wasn't the right size, but I reasoned that with a bit of work I could make it fit. When it arrived, as expected, it was too wide and, annoyingly, a bit too short for the radiator on the Skorpion. Time to get busy. 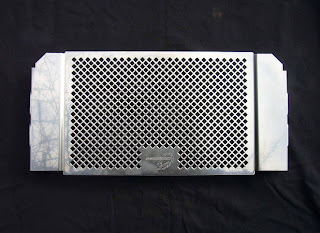 I straightened the existing shoulders until I had a flat piece of metal. Then, in a vice, I bent it to make new shoulders which now fitted snugly around the radiator. There was nothing I could do about it being too short, but I reckoned that it was better to have some protection than have nothing at all.

Mounting it to the bike needed some thought as the bolt holes in the side of the guard didn't line up with the holes on the side of the Skorpion's radiator, which is how I was planning to attach it. 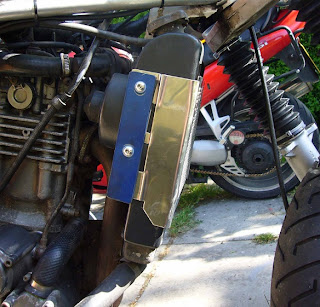 In the end, I made up two short lengths of flat bar which would go over the top of the guard and hold it in place. These were cut to the same length as the guard and had a couple of holes drilled in them to line up with the existing holes on the side of the radiator. To make them a bit more presentable, they were spray painted the same shade of blue as the handlebars. The existing bolts used to attach the radiator side pieces were removed and slightly longer stainless ones were fitted to hold the flat bar and the guard in place. 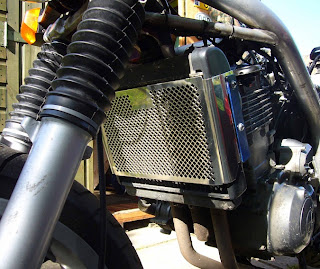 I guess that if you had unlimited funds you could have something made up or you might be able to locate one which fitted exactly. As a cheap option, though, I'm very pleased with how this turned out.