Get A Grip / Mind Your Fingers

While at the Scottish Motorcycle Show in March I picked up, amongst other things, a new set of grips. 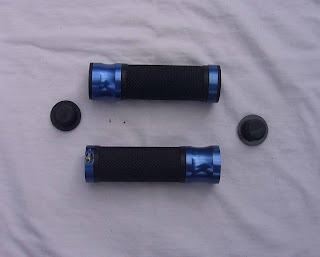 These ones, rather than being solid rubber, were metal with rubber inserts. I bought them because they were blue and worked with the overall look that I was aiming for. Only time will tell if they're actually any good (I also picked up a pair of standard rubber ones just in case they're not).

I also picked up some moto-cross style handguards. Now, handguards on a bike serve two important functions. First, and less importantly, they prevent your digits getting cold by keeping them out of the airflow. Second, if they are fitted with a strong enough wraparound metal bar, they can prevent your levers from snapping off should your bike fall over. 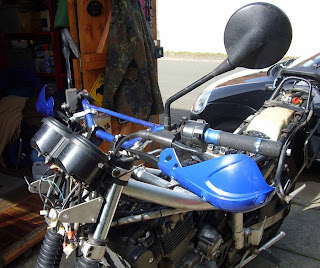 I bought the ones with the metal bar, brand name Venom, and in a fetching navy blue colour to match the rest of the bodywork. 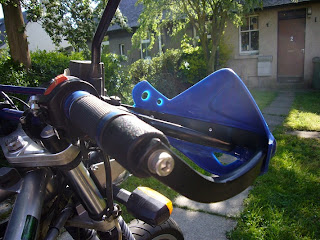 They came with an assortment of fittings to suit most needs and the only modification that I had to make was to replace the existing bolts fitted through the bar-end weights for slightly longer ones (in stainless, of course) to accommodate the extra thickness of the metal bar.