Let There be Light

The standard Tour headlight which I had was in pretty good shape apart from a bit of rust inside the shell and it was missing two of the three rubber grommets for the wiring loom on the back. Nothing that couldn't be put right. 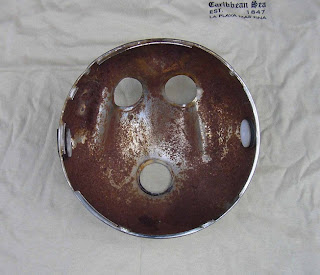 While the rust may only have been on the inside of the shell, I still decided to do something about it. With a wire brush fitted to an electric drill I buffed the worst of it off, sprayed the inside of the shell with a couple of coats of primer, and finished it off with some silver paint that I had lying around. Once the headlight was re-assembled you couldn't see any of this, but I'll know that it's been done, and at least the rust won't be getting any worse in the short term. 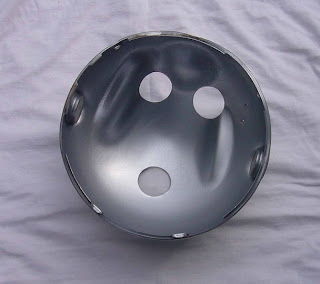 
To finish things off, I managed to pick up some replacement rubber grommets while at the Scottish Motorcycle Show in March. A bit of a polish and it looks as good as new.

The original wiring requires no attention and all of the connector blocks are interchangeable between the Traveller and the Tour anyway, so all that was needed was to attach the existing connectors to the new headlight and fit it to the machine.

To do this I added a set of standard mounting brackets. These locate on some clamps around the fork legs and the light unit bolts directly onto them. The only tricky bit about this is that you have to fit them over the fork legs, so the forks have to be removed to get them on. 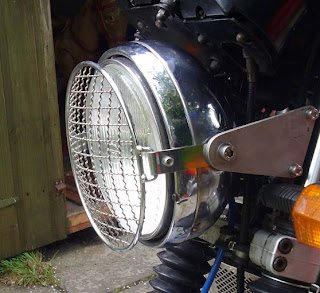 Finally, as part of the faux 'Mad Max' look that seemed to be evolving, I added a mesh stone guard from a Lambretta scooter while I was at it. This was a bit of a squeeze to get on, but worth the effort, I think.