To re-charge my various electrical doodads, I needed a 12v power socket. I had already fitted one to the Traveller fairing, but with that now removed, what to do with the socket? 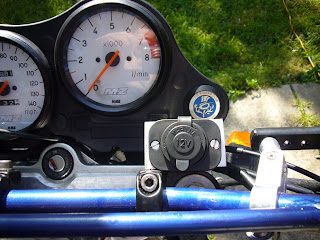 After much consideration, I decided that it should be located somewhere about the headstock. I could then put whatever gadget I needed charged into my tank-bag and run a cable to the socket which would be near to hand, but out of the worst of the weather behind the clocks and the screen. As the existing socket is intended for marine use, it's also got a waterproof rubber cover which helps.

Having considered a few alternatives, I decided to mount the socket on a plate bolted to one of the new handlebar clamps. I used a piece of aluminium angle bracket cut to size and drilled the necessary holes in it for the socket and for the bolts. 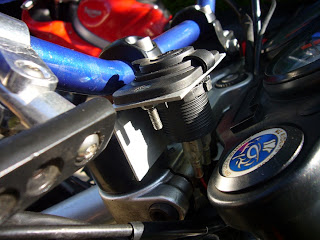 The socket was fitted onto the bracket and the bracket was then mounted to the right-hand handlebar clamp using one of the existing bolts. Mounted there it doesn't obscure the main instruments.

Power is taken directly from the battery rather than from the bike's wiring loom, so there's no need to chop into the existing electrics and it can be removed or moved whenever you want. A friend was kind enough to sort out a couple of lengths of electrical wire with spade connectors on one end for the socket and ring connectors to attach to the battery terminals on the other. These are the red and brown wires you can see in the picture. 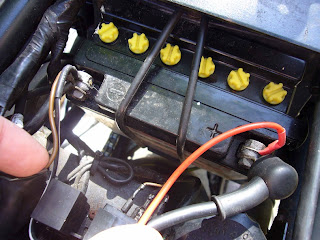 Once connected to the battery, the wires were then run along the frame to the power socket and tidied up using cable-ties.