The wheels already on the bike had nearly new tyres on them with plenty of life left. Rather than waste them, I had a spare set of wheels cleaned up and fitted with new bearings ready for my new dual-sport tyres. 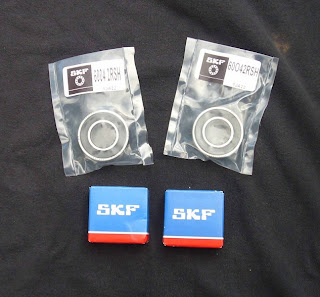 To try and anticipate the sort of road conditions I am likely to encounter in northern Norway I sourced a set of Avon Distanzia super motard tyres in 120/70HR17 (front) and 150/60HR17 (rear). The front is a little over-size but I couldn't find a suitable tyre with the right dimensions. 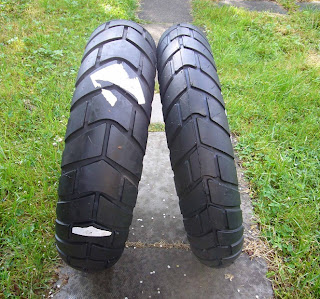 The biggest problem that I encountered was in finding somewhere to actually fit them for me. Most of the local shops either flatly refused as I hadn’t bought the tyres from them, or offered to do it for ridiculous amounts of money. Finally I found somewhere willing and dropped them off. Unfortunately, when I picked them up I was told that they hadn’t been balanced. First guy said that they ‘didn’t fit the machine’; then the other guy who I paid said they didn’t have the time. Who to believe? Probably guy No. 2.

In the end I did a (very) rough job of balancing them myself and, as everything seemed to be running okay, they were duly fitted.

Only point to mention is that due to the oversize nature of the front tyre I had to change the bolt holding the speedo cable guide to the front mudguard for a dome headed one and fit it from the rear as there was now insufficient clearance for a nut between the mudguard and the tyre.